We left San Diego at 4 pm on December 12th and sailed through the night, arriving about 60 miles across the border in Ensenada at 8 am the next morning.  As we pulled into the harbor, we were surprised to see what appeared to be a Washington state ferry.  Upon closer inspection, it was indeed the Nisqually ferry, which operated in the Puget Sound and San Juan Islands.  Apparently, it was one of four ferries that were decommissioned in 2009 and sent down to Mexico to be recycled.
After we checked in at the marina, we headed over to the offices of the Port Captain and immigration offices.  We were anticipating that they would search the boat, but the check-in process only involved paperwork.  The check-in process was a little unusual.  There were four different offices within a single building:  a bank, office of the port captain, immigration office, and small office that makes copies.  We went from place to place filling out forms and getting signatures and stamps as directed.   We started at the immigration office, followed by the bank, and then back to immigration and then to the port captain.  After that we were sent to make copies then back to the port captain, another stop at immigration, another to the bank, again to the port captain, and then finally we finished at the immigration office.  After an hour and a half we had cleared customs and received our 6 month tourist visas.  We bought our temporary import permit and fishing licenses in the US so it went faster for us than some of the others in the office.
After we finished, we went out for lunch and walked around town a little bit, and then went to the grocery store to provision for our trip down to Cabo San Lucas.  We stayed the night in Ensenada and left the next morning after checking the weather.
The trip from Ensenada to Cabo San Lucas was one of our longest and most enjoyable passages so far.  We had light to moderate winds from the northwest and the seas were rarely over 5 feet.  This was also the warmest and driest passage we’ve made so far, and most of the evenings we had clear skies and the moon provided almost enough light to read out in the cockpit.  The longer passage also provided more time to get accustomed to night watches and being out at sea.  On the last day, we finally caught a fish.  It was a small mackerel, but it was enough for a couple rounds of fish tacos. 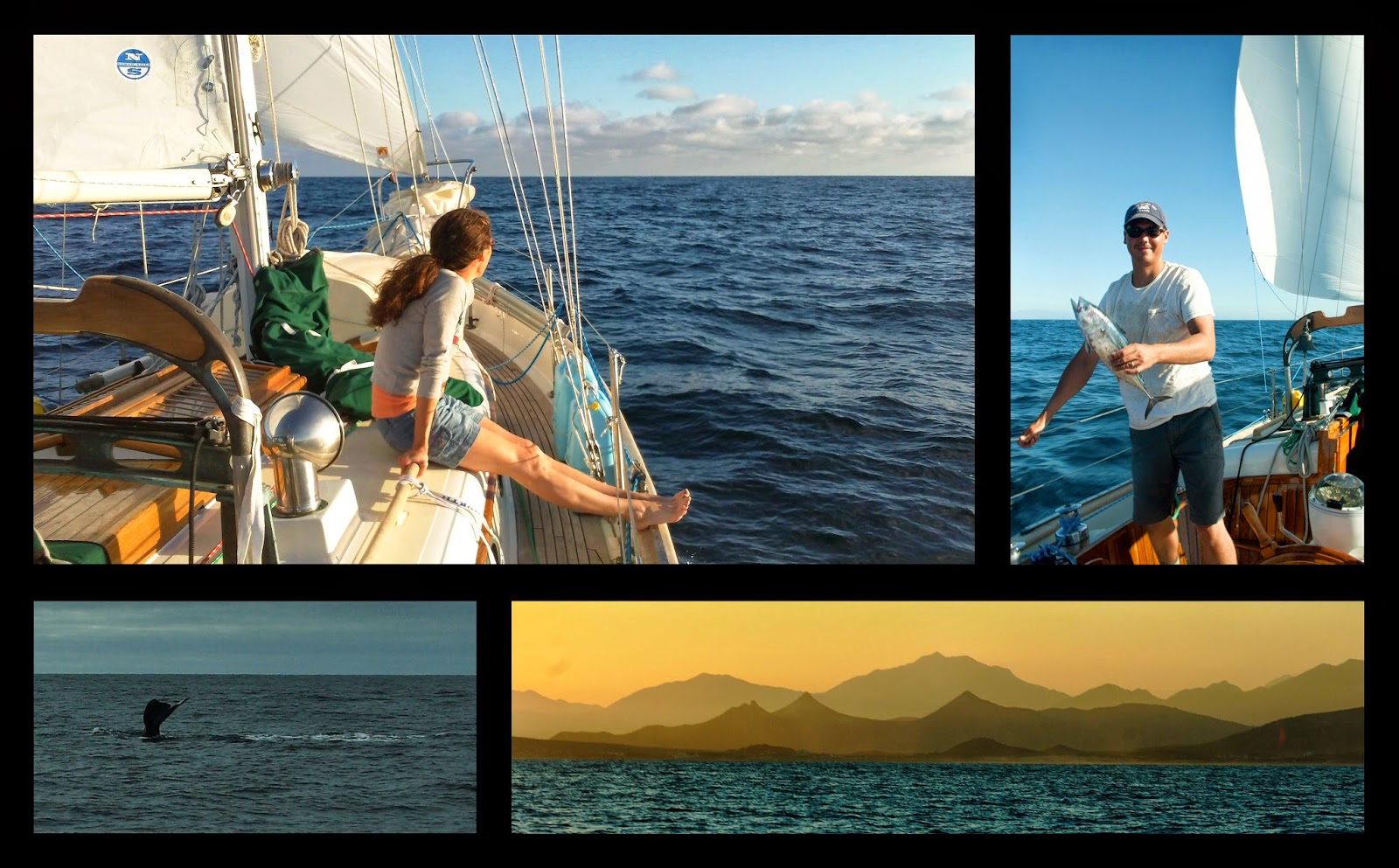 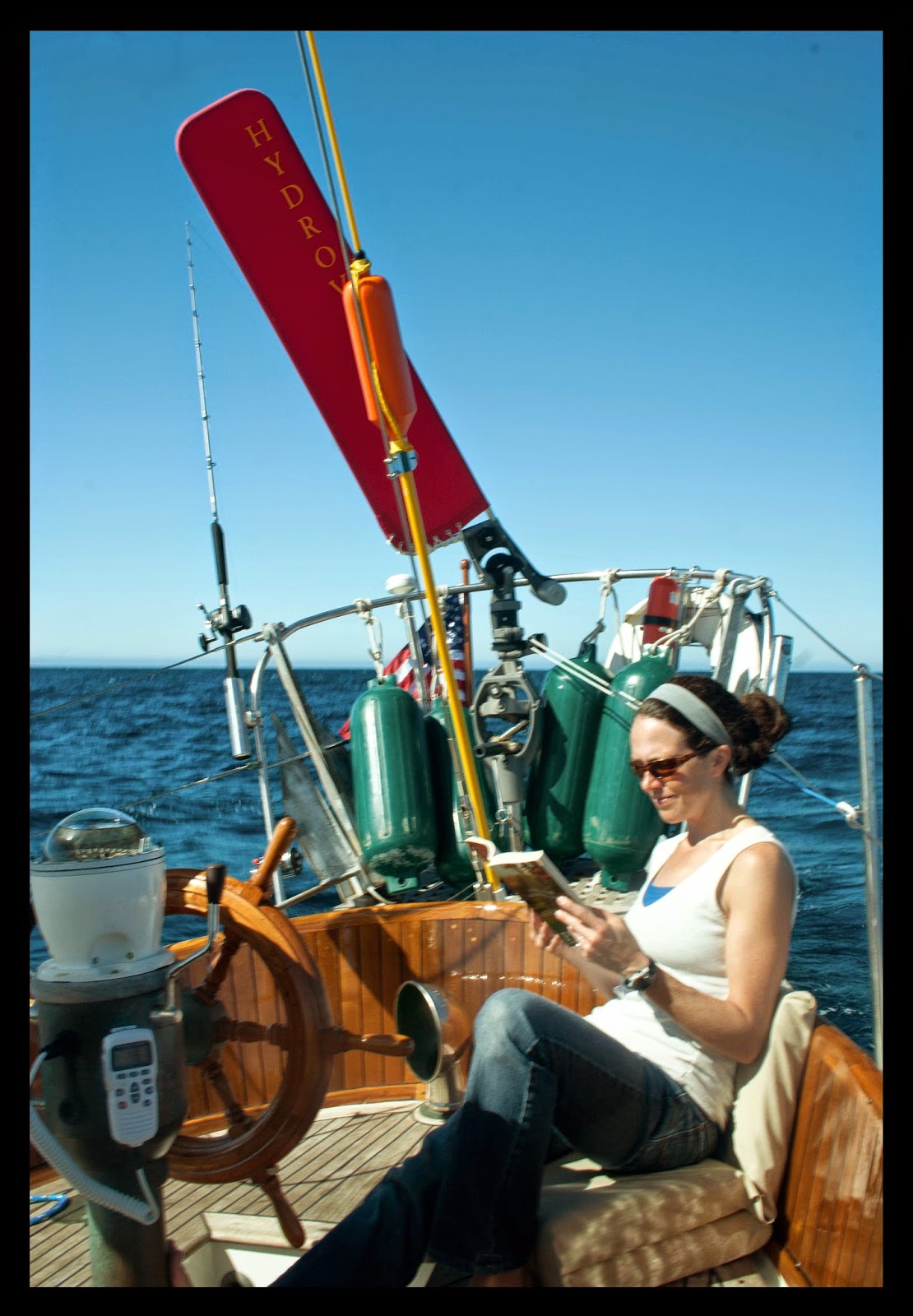 The winds were consistent enough that we used the windvane for a significant amount of time.  The windvane is a mechanism that steers the boat on a certain course relative to the wind direction.  The way it works is you set the sails and balance the boat on a certain course and lock down the wheel.  Then you point the windvane in the direction of the wind.  When the boat veers off, the vane turns a rudder and immediately puts her back on the same path, relative to the wind.  This means that as long as there aren’t any significant changes in the wind conditions, we can set the windvane and not have to worry about steering the boat.  On this passage there were several times we had it going for 15-20 hours at a time.  This gave us a lot more time to do whatever we wanted during the day, and the night passages went by much faster since we could just read and stick our head out to look for other boats every ten minutes or so.

We arrived in Cabo San Lucas at 8 am on December 20th.  The landscape of the bay is quite striking, with the long stretch of beach on one side and the monoliths and rocky coastline on the other.  It was a bit of a shock to pull into the harbor at Cabo after being out at sea for six days.  The place is a bustling tourist town with people and boats everywhere.  We pulled up to the fuel dock to get some diesel, and then checked in at the marina.  As we had been warned, guest moorage in Cabo was indeed expensive.  We paid four times as much as we did in San Francisco, but it was nice to stretch our legs and have a full night of uninterrupted sleep.  We spent the rest of the day walking around town and then left late the next morning.

Our next stop is La Paz, which is about a day and a half away.  We plan on staying there through the holidays and then spending a few weeks exploring the anchorages north of La Paz.
Posted by Diana Steiner at 8:00 AM
Email ThisBlogThis!Share to TwitterShare to FacebookShare to Pinterest

After we arrived in San Diego, we spent a few days relaxing, and getting the boat cleaned up.  San Diego is the largest city we have sailed into and it took us a few days to get our bearings and figure out where we could provision and how to get around town.  Fortunately, people in San Diego are very friendly and would go out of their way to help us find things.
We had quite a few boat projects to do and wanted to get as many of them done in San Diego as we could since we weren’t sure how easy it would be to find supplies in Mexico.  The first project was to haul Saviah out of the water, so we found a boat yard on nearby Shelter Island.  We spent five days in the boat yard.  The first order of business was to apply Saviah’s name and hailing port stickers on the hull.  We also had to enlarge our engine intake through hull to provide enough sea water flow to power the engine and the desalinator.
Then we started the sanding.  Much of the exterior teak that had remained uncovered was starting to show the effects of four years in the elements.  Since the peeling and pitting was too far gone to repair, we needed to sand it down to bare wood.  While she was out of the water, we also needed to clean the bottom, put another coat of paint on, and replace the zincs.  After five very long days, she was ready to be back in the water.

Early the next day, we hopped on a plane and headed to Houston to visit Andrew’s family.  It was good to see everyone.  We celebrated Andrew’s dad’s 60th birthday early since the whole family was together.  When we got back we decided to save some money and move to the mooring balls near downtown.  They are only $7/day to stay and it was in a good location near downtown.   They have dinghy docks there, so we rowed to shore a few days a week.

During our stay on the mooring balls we spent about half our time working on the boat and researching Mexico and the other half doing sightseeing and walking around town getting supplies.  We bought a one week pass for Balboa Park, which got us into the zoo and about a dozen museums.  We spent a day at the zoo and a couple days walking through the museums and the rest of the park.  We also went to the usual tourist attractions, including Old Town San Diego, the Gas Lamp district and Little Italy. 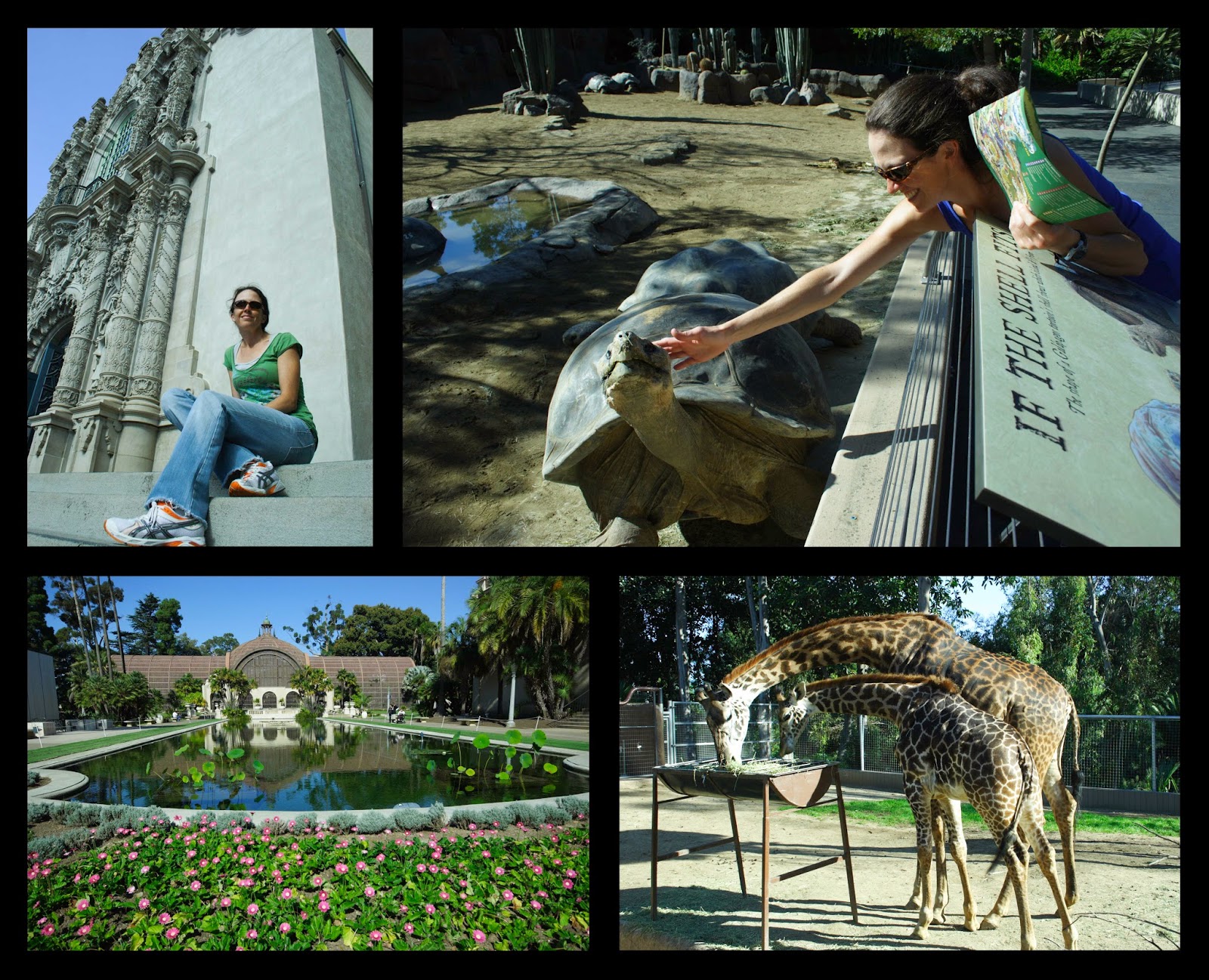 Thanksgiving Day in San Diego was a gorgeous day, with 65 degree weather and sunshine.  We spent the morning walking around the waterfront, and had a non-traditional steak dinner.  A turkey would definitely not fit in our little oven.


We discovered that renting a car for the weekend cost about the same as a bus pass, so we decided to rent a car for three days and do more provisioning.  It was very nice to be able to put groceries in the trunk instead of in our backpacks.  While we had the car we visited Coronado Island and walked around the Hotel Del Coronado, which is a beautiful hotel built in 1888.  They had an ice skating rink set up.  It was interesting to see people ice skating 100 feet from the beach wearing shorts and t-shirts while Christmas music was playing.
After two months in San Diego, we are ready to head to Mexico and to some warmer weather.  We put in a lot of hours on boat work over the last two months, and we are ready to do some relaxing for a while.  We think we have most of the systems where we want them.  Hopefully we will just have routine maintenance to deal with going forward.
After we head across the border, we plan to stop in Ensenada first to clear customs.  This is about 60 miles from San Diego.  Then we’ll head to Cabo San Lucas and up into the Sea of Cortez.  It is about 900 miles to La Paz, and we are hoping to be there by Christmas.
Posted by Diana Steiner at 11:43 AM
Email ThisBlogThis!Share to TwitterShare to FacebookShare to Pinterest
Newer Posts Older Posts Home
Subscribe to: Posts (Atom)